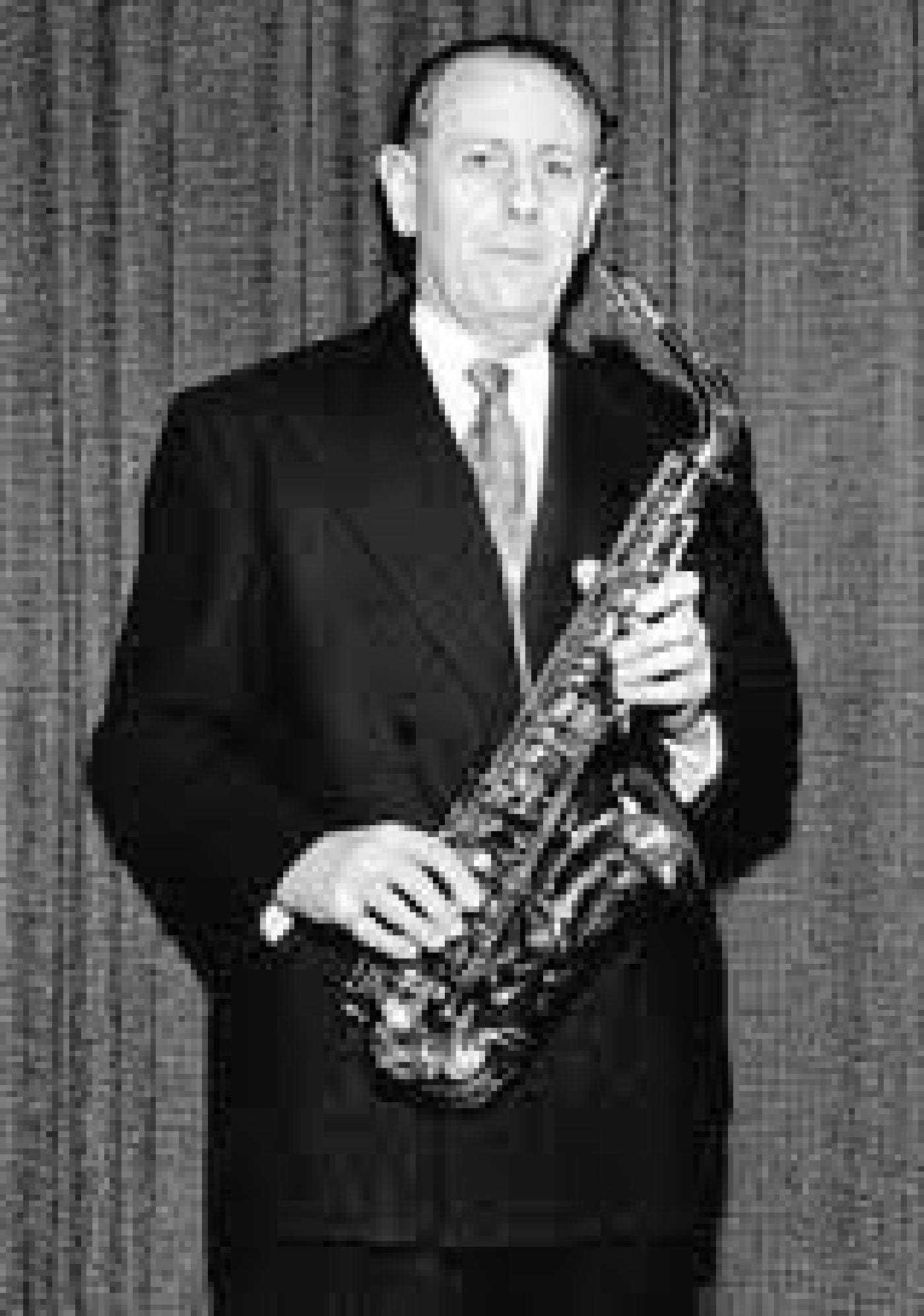 The Paris Conservatoire is one of the most prestigious music schools in the world and especially so for saxophonists. Marcel Mule is considered to be the founder of the French Saxophone School and the most representative saxophone soloist of his time. Mule was only the second Professor of Saxophone at The Conservatoire. The first was Adolph Sax.

I would have an assignment, usually two pieces, and we would simply start at the beginning of each piece. He taught a lot by playing; he would play a passage – ‘this has to be faster, this has to be’ whatever it has to be. He would mark my scores. A number of my pieces to this day have his handwriting, where he would write in different things. This was the way he approached it. We didn’t really have a technique book, although he had me work out of one of the violin books, Rode or something like that, which he had adapted to saxophone. But mostly he talked about the music – he would play examples, and then I would play. He discussed the style and the tempo. When we did Ibert, for example, he told me about what Jacques had felt about this or that; he had spoken with him. Unfortunately, I did not meet Ibert. I met Mrs. Ibert but I never met Jacques Ibert and I’m sorry that I didn’t. Mr. Mule told me that Ibert had written these high notes but then later he put ad libitum on those places; he wasn’t convinced that this was the best way. Mr. Mule told me that Ibert may have told the publisher that these sections should be ad libitum.

He would discuss general musical principles as well. For example, regarding vibrato, he often talked about how you must be certain that you have the center of the tone, that you’re at the right spot so the vibrato is not wild. Another principle he often talked about was technique – he said that, like climbing a ladder, be sure your foot is on this rung before you go to the next rung, which is a fine graphic example. I remember one time – I don’t remember what I was playing but it was a fast movement – and he told me that I should play it at the tempo. I said, ‘I’m sorry, Sir; I’m not ready to play it at that tempo.’ He said, ‘You can do it! Just play a measure or a short segment at a time.’ It was probably the most valuable builder of technique that I learned and I use that today. Even if you can’t play the measure, then do half a measure, but at tempo, and then put it together.

He definitely favored using the bis B-flat. When I first started, I played some scales and he said, ‘It’s more practical if you use the bis key on that scale.’ I was using the side key. I didn’t believe him but I respected him and so I practiced it that way. I found out he was right. Of course, in repetition back and forth, one wouldn’t want to do that but one would in the basic scales. On open C-sharp, he didn’t use the covered C-sharp fingering that most of us use today – and, of course, with the Series III it’s not possible – but what he did was add the side C key; open C-sharp with the side C key to bring it up a little bit. It was more for pitch than tone.

Concerning articulation, he always stressed that the notes have to sound. In other words, the tone was the important thing. I don’t know if he used this example exactly, but later I heard the expression that a short tone is a long tone played short. He didn’t say it that way but that’s what he would get at. Someone in the class, I remember, was playing staccato and he got hung up on the tongue movement and the tone wasn’t very good. He would say, ‘Play that again as if it were all legato. Now get that same tone.’ It’s pretty fundamental.

He didn’t describe the sound but taught principally by example. ‘You must play with a round tone. Free reed; the reed must be free.’ We all learned later that the embouchure is a combination of dampening the reed and letting the reed vibrate freely; you have to find the spot. He talked about ‘langue libre’ [literally, ‘free tongue’] very often. One of the things I found was that at a certain passage he would say, ‘avec expression’ or ‘sans expression.’ What he meant was ‘with’ or ‘with- out vibrato.’ He would very often interchange expression with vibrato.

Mule differed from my former teachers in that anything he would talk about – phrasing, dynamics, vibrato, or whatever the subject – he would then demonstrate. As a result, I had the opportunity to hear him play a great deal. I remember one of his expressions: ‘Don’t look for the difficult things, look for the simple things.’ Whenever he played, it always sounded simple; he made it sound simple. That was the driving force behind him. Another expression he would use was: ‘One never arrives.’ How true that was, how true that has been, and it is even more true today for me than ever. One never does arrive. Being with Mr. Mule was a great experience. Learning the literature and his approach to the instrument was wonderful. But what impressed me the most was the way he handled people. He was a great gentleman.

For more information on the life of Marcel Mule, read Marcel Mule: His Life and the Saxophone by Eugene Rousseau.. 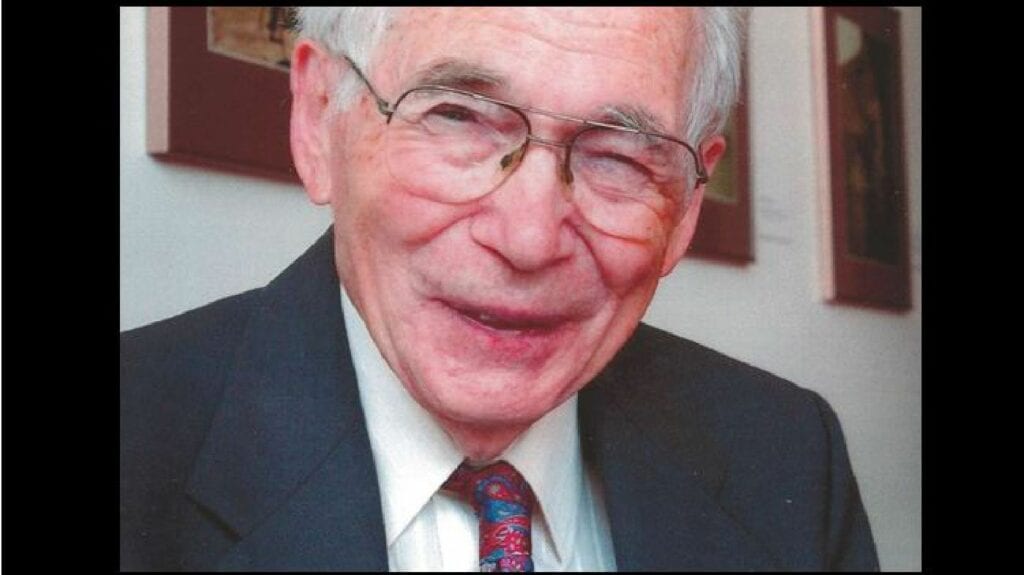 University of Iowa Professor Emeritus Himie Voxman was the woodwind professor at the university from 1939 to 1954. He was appointed director of the Department of Music (later changed to the School of Music) in 1954, a position he held until his retirement in 1980.

Himie Voxman, through the years, became a wonderful friend. He has helped me in so many ways. He has always had a very quiet manner and a love for music combined with a very stable personality – predictable, even, cool, calm and dedicated. And yet he always had a tremendous intellectual curiosity and capacity for scholarship. He was a man who understood how to write well, and who could take a book in German or French and figure out what the meaning was. I learned from him that there was always something to learn and there still is. 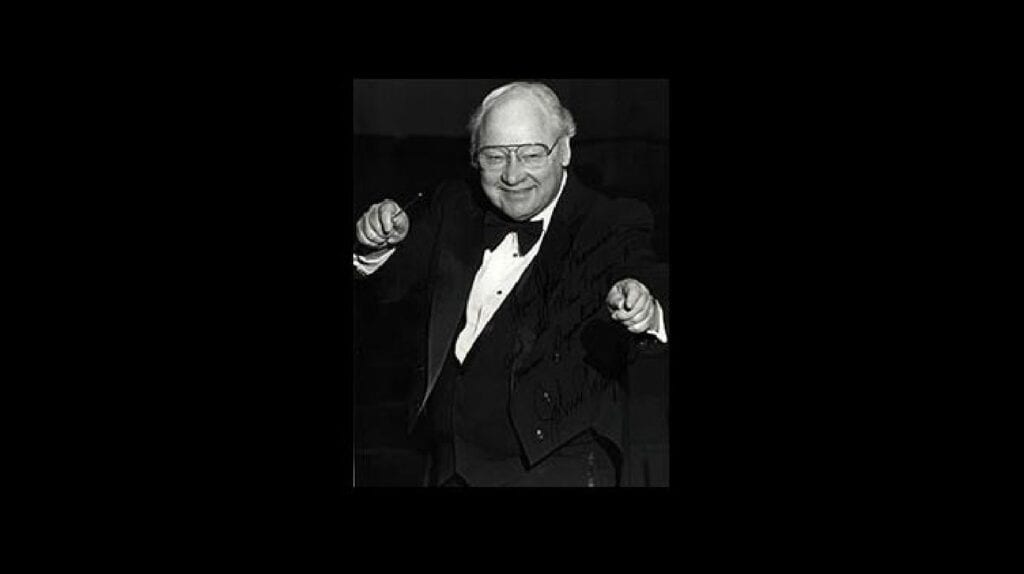 Eugene Rousseau: For me, as a saxophonist, it was a fantastic experience to be at Northwestern during the first year of John Paynter’s tenure, the first year he was the Director of Bands. We played the Hindemith Symphony; this new addition to the band library was stunning. What an experience! Later, he helped very much my career with recommendations. He was very supportive. He even encouraged me to apply for the saxophone position at Northwestern because he thought NU should have a saxophone in its offerings. He told me to write the Dean about that, which I did, although I don’t exactly remember when. Of course, at that time, he didn’t even know Fred Hemke, who came to Northwestern in 1963. 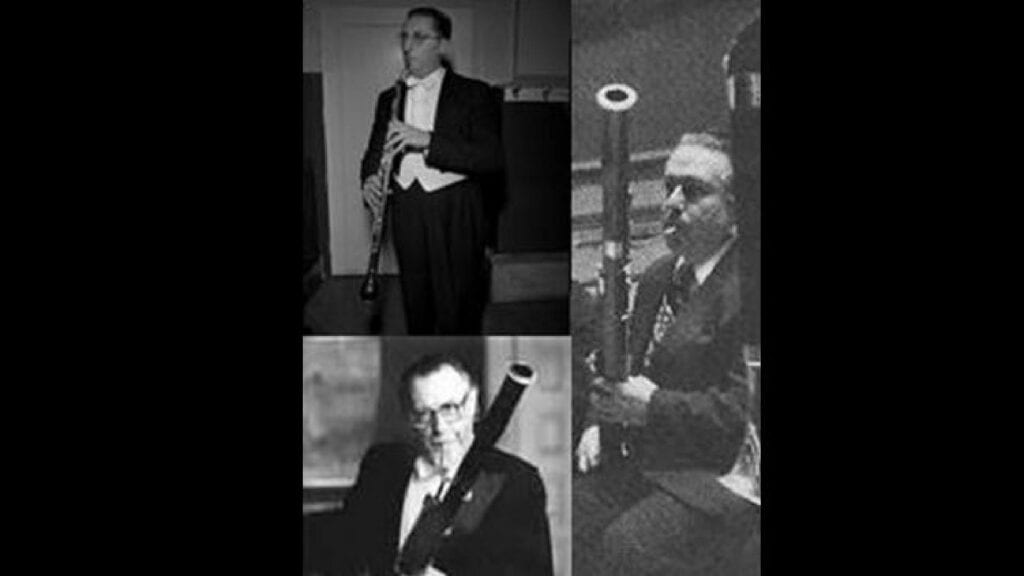 Eugene Rousseau: My emphasis (at Northwestern) was music education but we had to declare an instrument. I chose oboe because I wanted to learn oboe. This was in line with my goal of becoming a band director. The only oboe instruction I had had was in woodwind techniques, which was virtually nothing. I was to meet the oboe teacher, Mr. Robert Mayer, at his studio at a certain hour. I had not met Mayer before although, interestingly, he was at the 1953 commencement at the Chicago Musical College. He proved to be an outstanding teacher, and I recall very well my first meeting with him. I came to his studio without an oboe because I could not afford to buy one. He immediately loaned one of his oboes to me, without charge.. I enjoyed very much his lessons and I learned to play oboe pretty well by the end of the year.

I took flute lessons from Emil Eck; he was in the Chicago Symphony and, as I remember, was from Germany; a very nice gentleman. He had a way of expressing that I remember: It’s too shteep {steep], meaning the angle of the flute. I took bassoon lessons from Wilbur Simpson who passed away several years ago; he was a member of the Chicago Symphony. I had a lesson with Leonard Sharrow in 1956, just prior to assuming my teaching position in woodwinds at Luther College. I played saxophone in the Wind Ensemble. I thought it would be better to be versatile and that’s proved to be true.

Eugene Rousseau: I studied clarinet with both of them, but not with any vision of a future as a clarinetist. My goal at that time was to become a high school band director.

Eugene Rousseau: Horace Frederick came to my high school one day per week to give lessons on all instruments. Although he was a trombonist, he knew many professional players, so would consult with them about saxophone music, mouthpieces, reeds, etc. It was he who told me to purchase the Ibert Concertino da Camera. I followed his recommendation, then proceeded to Lyons Band Instrument Company in Chicago to purchase some reeds. The salesman, being friendly, asked if was planning to enter the high school solo competition. I was pleased to tell him that I was, and quickly showed him the music. His eyes widened and his jaw dropped. “Do you have Marcel Mule’s recording of this piece?” “Who?”, I replied. I immediately purchased this 78 rpm two-disc set. It was a listening experience that changed my life.

Elda Jansen who made early instruction available on an ad hoc basis (there was no instrumental program in grade school in 1941) and, who very cleverly convinced me to stay with saxophone, rather than switch to trumpet.